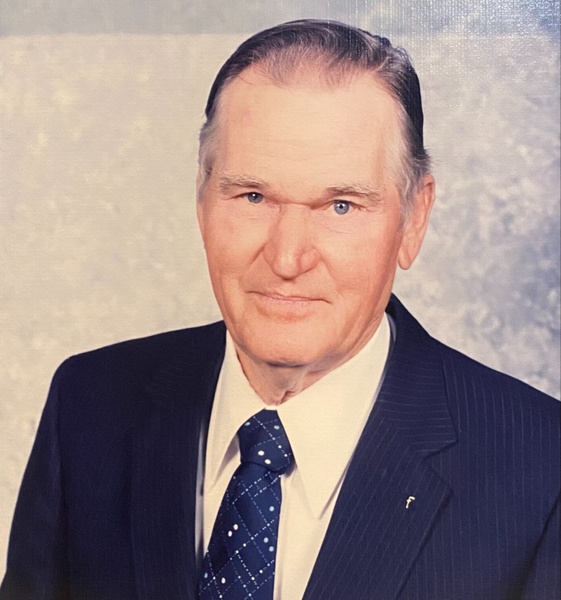 Mr. Alfred Oswald Bugg, Sr., 98, of Bradyville, Tennessee went on to be with the Lord on Wednesday, July 13, 2022 with his son by his side. He was born to the late Oscar Ellis and Myra Aspen Smithson Bugg in Woodbury, Tennessee on Wednesday, March 5, 1924. In addition to his parents, he was preceded in death by his wife, Frances "Fran" Bugg; son, Matthew Bugg; brother, Paul Bugg; and sisters, Mary Newhouse and Christine Floyd.

Being born on the family farm in Cannon County and raised during the Great Depression left lasting marks on Mr. Bugg's life. He learned early on the hardships this life has to offer, and it created in him a strong work ethic and resilience, which some people might call stubbornness. When he turned 16, Mr. Bugg thought it was high time to head out on his own.

After a year, the United States began to go through a new turmoil, officially entering World War II in December 1941. Mr. Bugg had gone from Murfreesboro to Massachusetts and finally to Michigan. Originally moving to Michigan for work, he instead found a higher calling. In 1945, Mr. Bugg answered the Nation's call and was drafted into the U.S. Army, serving with the 600th Engineers in the 5th Air Corp. They worked on runways and were the first Americans on Japanese soil at the Yokota Air Base, 30 miles from Tokyo.

Coming back to the States, Mr. Bugg got back to his purpose for being in Michigan and began working as a Heavy Equipment Operator for Operating Engineers 324. He primarily operated the 300-ton cranes and the 360-foot boom lifts and used the brakes to his advantage. While everything was getting set up at work sites, he was reading and studying to earn his Bachelors from Wayne State University. From the age of 16, his goal and ambition was to be a self-made man, and he wasn't letting anything slow him down.

Michigan afforded Mr. Bugg many opportunities for growth and advancement, but it also is where he met his beloved wife, Fran. They were married March 4, 1961 and enjoyed many years of adventure together, joining clubs like the Tip Toppers of Detroit and Red Wing Motorcycle Club. Of course, their greatest adventure was starting a family together, and Mr. Bugg was sure to raise his kids with the frugality and resilience of his generation in mind.

Once Michigan couldn't offer them anything else, Mr. Bugg decided it was time to move back home. With a name like Bugg people were bound to get talking, and Mr. Bugg enjoyed being around people. Smith Grove Church of Christ, where his son Al Bugg, Jr. preaches, became his church home and the main social hub in his life. He also was a member of the Senior Citizen Center and enjoyed music nights. Being blessed with 34 years back in Tennessee, he picked up the passion for horse riding at age 70. Even after being thrown from his horse in his mid-80s, he didn't stop riding until he was 94. The only modification he needed was cutting off his saddle horn. He loved his horses, and his last one died only about a year before him.

It's not often you hear a homecoming story where they get to come back to the exact same place, but Mr. Bugg's story is one of those. He lived on the land where he was born, and he was determined to live there until he died. Just like he succeeded in being a self-made man, Mr. Bugg also held true to this vow.

Visitation will be held at Gentry-Smith Funeral Home on Friday, July 15, 2022 from 5-8 pm. Funeral services will be Saturday, July 16, 2022 at 11 am in the Gentry-Smith Funeral Home chapel. His son, Al Bugg, Jr., will officiate. Interment will be in Midway Church of Christ Cemetery. In lieu of flowers, memorial donations may be made to Smith Grove Church of Christ, Cannon Christian Academy, and Woodbury Day School.

To order memorial trees or send flowers to the family in memory of Alfred Oswald Bugg, Sr., please visit our flower store.