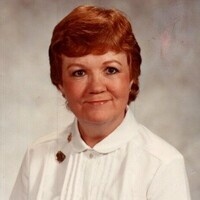 Alice "Joy" Nicolau, 88, of Murfreesboro, TN passed away on October 5, 2021. She was born in Forsyth, GA on March 4, 1933. Not long after, her family moved to Miami, FL, where she became the oldest of four children. Her sister was born when Joy was 12 years old and she learned to be a caregiver at a young age, that caring heart followed her throughout her life. During her teen years, she was very involved in the Baptist church. It further developed her passion for helping people, but this life wasn't made to be done alone.

After graduating from Miami Sr. High School in 1950, she started working at a company where she met her future husband, Frank W. Nicolau. Joy had a car, and Frank needed a ride home. It was a match made in heaven. At the time, Joy was a quiet and shy redhead, while Frank was a Puerto Rican from New York. He knew how to be the life of the party playing drums in a band. A classic case of opposites attracting, they married on August 29, 1953, officially becoming a real-life "Lucy and Ricky Ricardo" couple.

Communication is key in any relationship, and Frank and Joy were devoted to communicating with one another. Since most of Frank's family spoke Spanish, Joy happily learned Spanish to share conversations and stories with them. When they weren't using words, their communication was in sync through dance. They shared a love for dancing and witnessing them dance the jitterbug together was a sight you would not soon forget.

Frank and Joy desired a child most in their life. Though they did not have a child early on in their marriage like they wanted, the Lord blessed them with a baby girl in 1962 after 10 blissful years together. They fittingly named her Charmaine after the 1927 song, which talks about waiting for Charmaine to come.

Joy had a restless spirit. She craved adventure, and wherever Joy went, Frank would follow. In the 70s, they learned how to ski, and they made it a habit of taking trips to areas with colder climates to practice their skills and enjoy the snow. With Frank's career as a corporate salesman, he and Joy would often take trips driving up and down the state of Florida.

Even if it wasn't far, Joy always wanted to feel like she was going somewhere. It didn't matter if it was down the block or across the United States; she wanted to go. There was a running joke between Joy and Charmaine that her middle name was "I wanna go." Because of this, the family enjoyed many trips traveling and exploring together. Joy’s adventures took her to 18 countries and all 50 states.

Joy earned a degree in Nursing from the University of Miami in 1983.  In order to pay for her college, she accepted a full-ride scholarship through the Health Service Corps. In return for paying for her schooling, they required her to work a minimum of two years in an underserved population. It was a fitting trade for Joy's caring heart, and after graduating, she and Frank moved to Gallup, NM, where she worked at the Navajo Indian Hospital on the reservation.

In 1985, they decided to redirect their adventure to be closer to their beloved Charmaine and moved to Denver, CO, where Charmaine graduated from college. Joy decided to further her own education and earned a Master's in Gerontology from the University of Colorado in 1988. While earning her degree, Joy worked at the Veteran's Administration Medical Center, a service near and dear to her heart since Frank served in the military. Even with her adventurous spirit, Joy was still someone who believed in planting roots wherever you were. She combined her passion for helping others with being a part of the community through her volunteer work with the Denver Zoo and the American Cancer Society: Denver Chapter.

Joy's most treasured adventure on this earth was helping to raise her granddaughter who she loved dearly. Frank passed in 2008 and Joy carried on his memory for nearly 13 years, but now, she is reunited with him, where they never have to worry about having their last dance again.

To order memorial trees or send flowers to the family in memory of Alice "Joy" Nicolau, please visit our flower store.