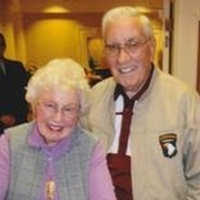 Mr. Haines grew up in Philadelphia and met his future wife, Jane, in high school.  They became sweethearts and married.  They celebrated 69 years of marriage before her passing in 2013.  He thought fondly of her everyday since her passing and longed to be with her again.  He served his country in the US Army during World War II.  He was awarded the Purple Heart and Bronze Star.  He was attached to Company I 501st Parachute Infantry Regiment of the 101st Airborne Division.  He parachuted into Holland as part of the D-Day invasion.  Shortly before they left for the invasion Gen. Eisenhower came and spoke with them and took pictures with some of the soldiers.  He saw combat in various parts of Europe including France, who also recently recognized his service with a medal. He was a member of the local American Legion Post #279.

Following his military service, he went on to earn a Master’s Degree from Penn State in Electrical Engineering.  He went to work for Burroughs Computer Systems.  They were part of the leading edge of technology at the time with the early stages of computer development.  Part of his work lead him into radar tracking systems and allowed he and Mrs. Jane to travel all over the world.  After traveling and living in many different places they made their home in Woodbury.  He was the type of man who put God, family, and country first.  His personality was always to be kind and considerate of others.  He didn’t complain, kept a positive outlook, never said bad word about anyone, and always had a smile.  He was a loving and devoted husband, father, grandfather, and great grandfather.  He enjoyed getting to be with the grandkids and great grandkids whenever he could.  He and Mrs. Jane were active in their church at St. Patrick’s Anglican Church.

Visitation will be held at Smith Funeral Home on Thursday, January 31, 2019 from 5-9 pm.  Funeral services will be Friday, February 1, 2019 at 2 pm in the Smith Funeral Home chapel.  Father Ray Kasch will officiate.  Interment will be in Cherry Cemetery.  In lieu of flowers memorial donations may be made to the local American Legion Post #279.  He will receive military funeral honors.  Share memories, thoughts and condolences with the family at www.smithfuneralhomewoodbury.net  Smith Funeral Home, 303 Murfreesboro Rd. Woodbury, TN 37190, 615-563-5337

To order memorial trees or send flowers to the family in memory of Andrew S. Haines, please visit our flower store.