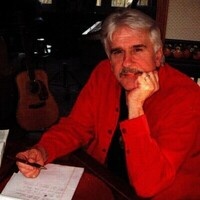 Brian Shaw, Sr. lived a life that could have been made into a movie. He had a free spirit and a giving heart that led him on many adventures, but everything he did was centered around his passion for music. Growing up, his parents sang and were on the radio, and he was bound to follow in their footsteps. He was musically gifted and learned to play guitar, fiddle, harmonica, mandolin, and ukulele.

Music might have been in his blood, but it wasn't until he met Bonita that a song reached his heart. They were high school sweethearts, and it wasn't until the Navy called that they left one another's side. Brian shipped out to Vietnam, and Bonita went off to college. He loved the Navy and took pride in his service, but music was still what flowed through his veins. One of his superiors told him that he needed to get to Nashville, and after 3 years in the Navy, he took the advice.

At the age of 23, he performed at the Grand Ole Opry. It just so happened that Elvis overheard him and said "Let me see this kid." Over the course of his career as a musician, singer, and songwriter, he had the opportunity to sing with Waylon Jennings and the Shaw Brothers on numerous occasions. Chet Atkins even heard Brian sing and play the guitar and gave his stamp of approval on the singing but not quite on the guitar.

To keep things interesting and stay up-to-date on the industry, Brian worked for the Radio Corporation of America (RCA) for a while. Then, his sights turned to a genre in the industry that meant a great deal to him. Gospel music, and when he got into it, he gave it his all. He was a member of River of Life Smyrna and wanted to share Jesus and his love for the Lord the best way he knew how. Using his gifts, he made 4 gospel CDs. He also had a knack for memorizing and quoting Bible verses and was a source of encouragement to everyone who crossed his path.

Later on in his life, Brian finally had the opportunity to revisit the path of an unfinished adventure. A mutual friend reconnected him and Bonita, and it was like they had never been apart. They picked up right where they left off and enjoyed 12 years of marriage. Just like a four-part harmony, they blended their families together and became a more full and beautiful version.

Brian loved his family and any time they were all able to get together. He earned the affectionate title of "Papa Brian" from his grandchildren and shared everything he could with them. Though all of this goes along with the main plot for Brian's life story, he also deviated from time to time to have side stories.

At one point, he decided to become a massage therapist, attending 12 different schools and earning 12 different certifications. Afterward, he worked in California, doing in-home massage therapy with several famous people making his clientele list. He also was a sports fan, and when it came to football, he stayed true to his birthroots and was a huge Penn State fan. However, when it came to basketball, he was rooting for Duke. For his final act, Brian selflessly chose to be a donor.

Memorial services will be held on Sunday, August 15, 2021 at 2:30 pm in the family's home. His music will be played before the services. Bagpipes will be played to honor his Scottish heritage, for which he was proud, and his family will sing to honor his memory and the song he brought to all of their hearts. Johnny Minick will officiate. In lieu of flowers, memorial donations may be made to the Wounded Warrior Project, Samaritan's Purse, Mercy Ships, or a charity of your choice. Share memories and condolences at www.gentrysmithfuneralhome.com Gentry-Smith Funeral Home, 303 Murfreesboro Rd. Woodbury, TN 37190, 615-563-5337

To send a flower arrangement or to plant trees in memory of Brian Robert Shaw, Sr., please click here to visit our Sympathy Store.

To order memorial trees or send flowers to the family in memory of Brian Robert Shaw, Sr., please visit our flower store.