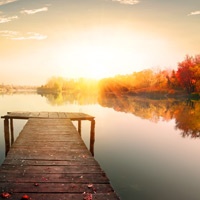 Mr. Chris Pursch had a down-to-earth personality and was a hardworking man. There wasn’t a time were he didn’t have a project. Even if there wasn’t something specific he needed to get done, he would find something to do. He did woodworking and combined that passion with his love for dogs to make a dog house mailbox for his beloved wife, Amy. When he wasn’t working, he was talking. He never ran out of things to say, and it seemed like he had a million stories for any occasion. He knew just how to make a place for everything in his house and in his life. Family was very important to him.

A single parent, he loved his daughter, Amber, dearly. You could fill a U-Haul trailer with all of the pictures he took of her growing up, but he also wasn’t afraid to show tough love. He believed in the saying “Give a man a fish, and you feed him for a day. Teach a man to fish, and you feed him for a lifetime.” Amber was raised to have Chris’s mentality of if you want something, you works for it and don’t let anyone take that away from you. His parenting earned him the love and respect of his daughter even to this day.

Though Chris was gruff on the outside, he had a heart of gold. He might not give to someone on the side of the road, but he would help out however he could. His acts of kindness followed the same mentality of teaching rather than just giving. From Indiana, it was fitting he ended up in the Volunteer State, and Tennessee is where he always wanted to be. Though he hadn’t ever been to Tennessee before, he would mention feeling like he needed to “get back to Tennessee.” He felt connected to the area and had the passion for old country music to match. Johnny Cash, Willie Nelson, George Jones, The Outlaws, and Waylon Jennings, to name a few, were the soundtrack of his life.

To send a flower arrangement or to plant trees in memory of Chris Edward Pursch, please click here to visit our Sympathy Store.

To order memorial trees or send flowers to the family in memory of Chris Edward Pursch, please visit our flower store.