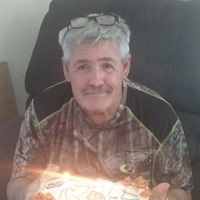 He grew up in Florida and found his way to Tennessee several years ago.  After he and Tammy met, she traveled to Florida for the first time in her life to visit him.  They had just celebrated their anniversary on Saturday.  He worked as a truck driver for many years until he became disabled.  He enjoyed watching westerns, especially starring John Wayne. He like going camping and fishing.  He loved spending time with Tammy and her dad.

The family plans to hold a service at a later date.  Support the family with condolences and memories at www.smithfuneralhomewoodbury.net  Smith Funeral Home, 303 Murfreesboro Rd. Woodbury, TN 37190, 615-563-5337

To send a flower arrangement or to plant trees in memory of Dale E Dinkins, please click here to visit our Sympathy Store.

To order memorial trees or send flowers to the family in memory of Dale E Dinkins, please visit our flower store.