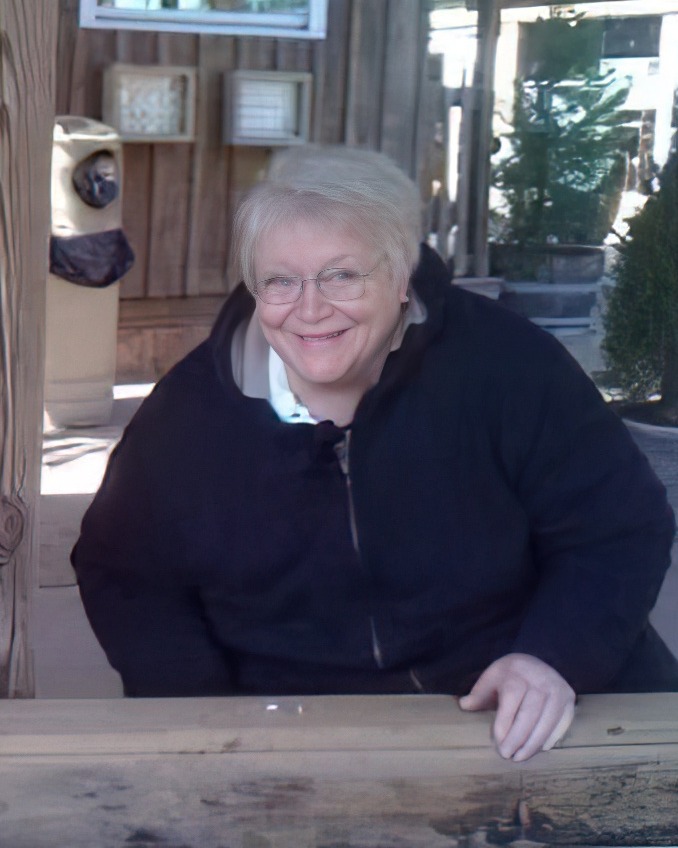 Ms. Diane Elaine McGill, 74, of Woodbury, Tennessee passed away on Saturday, October 15, 2022. She was born in Zanesville, Ohio on Thursday, March 18, 1948. Preceding her in death were her parents, Joseph E. Mitchell and Madeline Denbo, and her brother, Randy Mitchell.

Diane was a woman you could learn a thing or two from. She kept herself busy and maintained her child-like mischievous nature throughout her life. Something else that she maintained was her hobbies. Her grandmother taught her how to sew, and Diane fell in love with it. She loved to quilt and hand sew bears, bonnets, clothes, and you name it! The dream was to pass on that same passion and excitement to Kelly, so she bought Kelly her first sewing machine when she turned 10 years old.

At that time, Diane owned an art shop in South Lyon, Michigan, and she was teaching budding artisans while also working as a traveling artist. One of her main events was the Ann Arbor Art Show, which happened to be just up the road. Being a master craftsman offered Diane the vision to see what mattered most in life and take the time to nurture it. She took pleasure in gardening and baking, and when she wasn't doing her hobbies, she was renovating.

Closing up the shop, Diane bought a summer lake house to be her and Kelly's home. Since it was meant as a summer house, the pipes would freeze every winter. Diane spent countless hours winterizing and remodeling the house while also keeping up with Kelly's sewing lessons of course. They enjoyed a more Bohemian lifestyle. Once the Great Blizzard of 1978 hit Michigan, Diane decided it was time to pack up and move to Fort Myers, Florida.

There, she and Kelly lived in a camper on the beach. Diane afforded Kelly something much more important in her mind, and that was a childhood filled with love, learning, laughter, and adventure. They made many fond memories together before Diane decided to pursue another avenue of her interests. She enrolled in Edison Community College (now Florida SouthWestern State College) in Fort Myers, Florida and earned her 2-year degree. From there, she went on to get her Bachelors in Criminal Justice from the University of Florida.

Then, Diane got accepted to Nova Southeastern University's Shepard Broad College of Law in Ft. Lauderdale, Florida. Finally, Diane reached the culmination of everything she had been working toward when she graduated in 1987 and was admitted to the Florida Bar on May 14, 1987, finishing everything right before Kelly graduated from high school. Right out of school, Diane began working for the Broward County Sheriff's Office. However, she had plans for something bigger, better, and, of course, busier.

Having an entrepreneurial spirit, Diane returned to Fort Myers and opened her own law practice. Unable to say no to another iron in the fire, she specialized in Corporate, Family, Probate, Wills & Trusts, and Real Estate law. They say "jack of all trades, master of none," but that was far from the truth for Diane. She was known to be quite the legal genius and a very successful litigator.

Yet, out of all of her accomplishments, Diane's crowning jewel was placed in November 1998 when Adam was born. He must have thought Diane was quite the award as well because he called her "Grammy." They were two peas in a pod when it came to creativity. He had the same creative spirit and found the same thrill from having too many irons on the fire. Diane and Adam were sure to always have projects going.

When Diane decided it was time to retire, she decided it was also time to leave Florida and go back to simpler times. She rode horses well up into her young adult years, and the mountains were calling her name. So, she and Kelly started looking for land in East Tennessee. Somehow, she and Kelly came across an ad on Craigslist for land in the Short Mountain community. Luckily, they realized that was probably a scam, but it brought their search to Woodbury. The Hollow Springs community became the place they called home, and after being in the public for so many years, Diane became a homebody.

She loved her cats. They fit her personality well and were just as mischievous. Adam got the family calling them "Grammy's little darlings." Ling and Ping were her Siamese cuddle buddies. For the last 10 years of her life, she got to experience those little things that mattered so much to her.

Diane got back to sewing and quilting, and though the lessons paid off with Kelly, she found more success when Adam brought Kyla home. Diane was also overjoyed to see Kelly marry Charles in September 2020. The family grew exponentially with Charles, and Diane quilted some of his grandchildren their own blanket.

As she neared the end of her life journey, Diane got Kelly on the hunt for land again. Kelly came across Gilley Hill Cemetery with 2 geese guarding the entrance, and the beauty she told Diane about pleased her soul. Though Diane never got to see it, she'll get to rest out in the country in a place that felt like home.

The family will hold private memorial services. Loretta Rhoades will officiate. Interment will be in Gilley Hill Cemetery.

In lieu of flowers, memorial donations may be made to The Gentle Barn (https://www.gentlebarn.org/donate/).