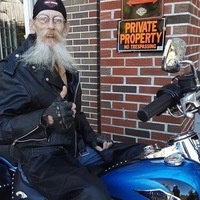 Mr. Edwin “Slim” Smith, 64, of Woodbury passed away unexpectedly on June 27, 2020. He was born on March 16, 1956 in Fort Campbell, Kentucky. He was preceded in death by his parents, Harold Edwin Smith and Evelyn Elaine Jarrell Smith, and by a son, C. J. Francis.

He was born into a military family. His dad served in the Air Force. He loved his country and decided to join the Army. While in the Army he was trained how to use a crane. During his time in the Army he was injured. After he was discharged, he went to work on an oil rig running a crane. He was a man of many talents. He could build a house from the ground up. He had a love for Harley Davidson motorcycles. Many people would ask if he was a member of any biker club. He was a devoted Christian and believer in Christ’s teachings and a friend made a patch for him to show people who asked if he belonged to a biker club. It said, “Riding for Christ”. He was a gentle soul who loved people and critters. His family joked he was the “Critter Whisperer”. He would have his chickens come sit in his lap. He was thoughtful and loving. He liked to kid and tease family and friends. He would leave you with a smile or laugh if he could. He and Sandra were childhood sweethearts who reconnected about 10 years ago. They made their home in Woodbury and it was the happiest time of his life.

Visitation will be held at Smith Funeral Home on Wednesday, July 1, 2020 from 12-2 pm. Funeral services will follow in the Smith Funeral Home chapel. Interment will be in Fugitt Cemetery. The U S Army Honor Guard will present funeral honors. Support the family with condolences and memories at www.smithfuneralhomewoodbury.net Smith Funeral Home, 303 Murfreesboro Rd. Woodbury, TN 37190, 615-563-5337

To send a flower arrangement or to plant trees in memory of Edwin "Slim" Wayne Smith, please click here to visit our Sympathy Store.

To order memorial trees or send flowers to the family in memory of Edwin "Slim" Wayne Smith, please visit our flower store.