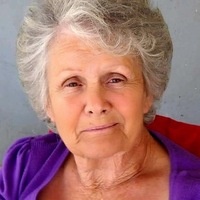 Mrs. Etta Mae was a homemaker through and through. Her arms may not have been long enough to hold all of her children, but her heart was. Her mother's heart knew no bounds and gave daddy's hands a run for their money in the love that she showed to her family and others. She helped raise most of her grandchildren and practiced what she preached on forgiveness. Though not able to attend church regularly, the church was in her heart. It didn't matter what wrong had been done to her, she was always ready to greet them with open arms, a plate of food, and a helping hand.

She was someone who would give you the shirt off her back, and she loved to take care of people, especially when it came to sitting with and caring for the elderly. Riley was the last grandbaby and the first one where she really let herself enjoy being a grandmother. She would let Riley get away with just about anything and believed her baby could do no wrong. However, the main baby in her life was Cheech, her little chihuahua with a big personality.

Some of her favorite movies inspired the name for her beloved dog, but it was a wonder that it wasn't some of her other interests in entertainment. Anytime Jesse or Joanne called to let her know to "turn on 242," she was quick to get off the phone. She enjoyed watching wrestling and made every effort to not miss a match. Mrs. Etta was also a fan of old-school classic country music, like Hank Williams, Sr, but she wasn't just a partaker in entertainment. She also knew how to host and have fun.

It's been said her fried pork chops, creamed potatoes, and beans could cure just about anything, and one of Joanne's first impressions of Mrs. Etta was when they went yard sale shopping in the blue maverick. Mrs. Etta was dubbed the "Yard Sale Queen," and she was always ready to burn up the road going from one to the next. If you mentioned something that you wanted or were looking for, she was bound to find it the next time she was at a yard sale.

Yard sales combined her two loves of shopping and being outdoors. Later on in her life, Jesse thinks she was trying to set him up to have his own yard sale with all of the chairs and other knick-knacks she would bring home. Though Mrs. Etta was all about saving money, she had extravagant taste when it came to her nails. She kept her fingernails long and enjoyed going to have her "feet done" with her granddaughter, Kimberly. She was just out to have fun and to be out and about. Being outside in the heat was one of her favorite places to be because she got cold easily. She enjoyed seeing all of the trees and flowers and even got Jesse and Joanne a tree for their wedding gift that 22 years later is still growing strong.

To send a flower arrangement or to plant trees in memory of Etta Mae Williams, please click here to visit our Sympathy Store.

To order memorial trees or send flowers to the family in memory of Etta Mae Williams, please visit our flower store.