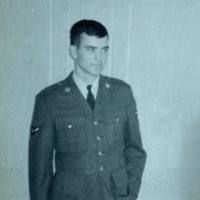 Gary started off life being a boy in every sense of the term, but being one of 10 children, he quickly transitioned into being a man. He was always one to look out for his siblings, especially the younger ones. In high school, Gary excelled at being an athlete and played basketball, but when Doug got interested, Gary went out of his way to show him the ropes. A natural-born leader, Gary taught Doug how to play basketball by creating and nailing a rim to the outside of the smokehouse. Turned out that Gary made quite the coach, and Doug earned a college scholarship for basketball.

His leadership and ingenuity attracted people to him, but he reserved the closest relationships for his siblings, especially his sister Rebecca. Most boys didn't want to hang out with little girls, especially if they were little sisters, but Gary didn't care what people thought. He would take Rebecca on outings and watch over her. Though he grew into his role as a protector quickly, it didn't affect his friendly and kind disposition. Growing up out in the country, you had to make your own fun, and Gary wasn't about to miss out on a frog-gigging expedition with friends.

After high school, Gary went off to Berea College in Kentucky for two years before being drafted in the Vietnam War. Seeing his potential, the Air Force shifted him over to serve in the Military Police, where his primary responsibilities were guarding military planes and training the canine units. When he had the opportunity for advancement to Lieutenant, Gary jumped at the offer. However, he hadn't written home to momma in a while, so Mrs. Beatrice decided that if he wouldn't answer her, surely he'd answer the preacher.

What Mrs. Beatrice didn't know was when the preacher called to inquire about Gary's whereabouts and how he was doing, Gary actually ended up getting moved back to being in the Military Police. Mrs. Beatrice finally got to hear from her boy, but it wasn't the phone call she'd been hoping for. And Gary's whereabouts? Well, he had the pleasure of serving time in the kitchen peeling potatoes for the disruption.

In total, Gary served 2 enlistments in the Air Force, traveling to Vietnam and Guam before bringing his military career to a close. He enjoyed playing basketball for the military team and managed to make several good memories during his time of service. However, it wasn't all fun and games, and Gary didn't miss out on seeing the atrocities of war. His shoulders had always been broad enough to carry the load, but his family could tell something had changed in him after the war. Nevertheless, he kept his problems to himself and continued to be a figure of strength for those he loved.

Coming back to civilian life, Gary tried to pick up where he had left off and live a normal life. He enrolled at Middle Tennessee State University and started back working on completing his general education courses. His daughter being born and working added to his load, but ultimately, family came first. Gary took his role as a protector and provider seriously and put family before everything else. So when times got tough, he quit school to work full-time and take care of his family.

Gary worked as a factory worker at GE until he retired after a work-related accident that caused him to lose a finger. He faced many trials and hardships during his lifetime from side effects due to his military service to the death of his daughter, Brandy. It was enough to make anyone ready to give up, but Gary just kept on trucking and took each blow in stride. His perseverance through the storms in his life was pure grit.

In his retirement, he took more time to go back to some of his original interests. He was a die-hard Tennessee fan, rooting for the UT Vols in basketball and football. Instead of frog gigging, he decided to kick back and go fishing, and Gary had an eye for special lures. His enjoyment on the river multiplied when he met and became fond of a little boy named Larry. They shared many fishing trips together, and Gary was able to go back to a simpler time when he was just a big brother being a coach.

Burial services will be private. Share memories and condolences at www.gentrysmithfuneralhome.com Gentry-Smith Funeral Home, 303 Murfreesboro Rd. Woodbury, TN 37190, 615-563-5337 Because every life has a story

To send a flower arrangement or to plant trees in memory of Gary Steven Hale, please click here to visit our Sympathy Store.

To order memorial trees or send flowers to the family in memory of Gary Steven Hale, please visit our flower store.