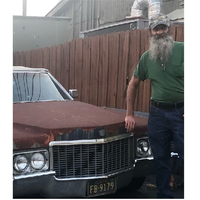 Mr. Gerald “Cadillac Joe” Wayne McCandless, 58, of Readyville passed away on April 18, 2021.  He was born in Winslow, IN on January 5, 1963.  Preceding him in death were his father, Dude McCandless, father-in-law, George Altheide, son, Gerald “Joe Joe” McCandless, and brother, Troy McCandless.

Though his name by birth was Gerald, almost everyone knew him as Cadillac Joe. He lived the life of a biker and was a very talented mechanic. An ASE-certified Master Technician, he could work on anything from a weed eater to a helicopter. Though his profession was auto mechanics, his hobby lied with motorcycles. His love for grease and wrenches was unmatched, and he made it clear that the only thing that came before his “old lady” was his bike. He worked hard in the oil fields to buy his first Harley and later on in life helped build the Epcot Center in Daytona, FL. Whether it was a car or a bike, you could be sure that he would get everyone else’s fixed before he worked on his own. Many people knew he was a Harley enthusiast, a big supporter of Anheuser-Busch, and a talented mechanic; however, his life was so much more than that.

Cadillac Joe was a man in every sense of the word. He served his family as a protector and provider. He was a wonderful father to his children. Stepping up to the plate, he stood in the place of their fathers when they needed him most. He treated them like they were his own and taught them how to be good parents. Even though he would go wherever the wind would take him, he stayed and enjoyed his time at the house with his family. He was a rock and a shelter from the storms of this life for his wife and children. Though he will be deeply missed, his presence and influence live on in the hearts and actions of his family and dear friends.

To send a flower arrangement or to plant trees in memory of Gerald "Cadillac Joe" Wayne McCandless, please click here to visit our Sympathy Store.

To order memorial trees or send flowers to the family in memory of Gerald "Cadillac Joe" Wayne McCandless, please visit our flower store.