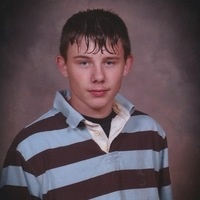 Mr. Gerald Allen “Joe Joe” McCandless, 28, of Woodbury passed away on June 17, 2020. He was born on December 21, 1990 in Evansville, Indiana. He was preceded in death by his grandfathers, Dude McCandless and George Altheide, step-grandfather, Bob Newcom, and by an uncle, Troy McCandless.

Family and friends all called him, “Joe Joe” after his dad’s nickname, “Cadillac Joe”. He graduated from Westside Elementary and CCHS in the Class of 2009. During high school he played football until he hurt his knee to bad to play anymore.  He and his family were very patriotic.  They loved the United States.  After high school he joined the U. S. Marines. He had a big and loud personality. When he came into a room you would know it right away. He had a big heart and would give you the shirt off his back.  He had a knack for knowing what to say to cheer you up if you were down. He liked doing mechanic work and worked construction building sheds more recently.

He loved his girls and liked to do anything they wanted. He would often take Ellie Mae on coon hunting adventures.  He liked to take them riding. They would tell him to go fast and do doughnuts, until Heather found out, anyway.  He liked riding 4-wheelers, fishing, kayaking, and just being outdoors.  Family described him as a go getter and a little stick of dynamite.

Visitation will be held at Smith Funeral Home on Saturday, June 20, 2020 from 11-1 pm. Funeral services will follow in the Smith Funeral Home chapel. Jay Johnson will officiate. Interment will be in Riverside Cemetery.  Due to his untimely passing and leaving three small girls, memorials donations are requested in lieu of flowers to assist with expenses. Share memories and condolences at www.smithfuneralhomewoodbury.net Smith Funeral Home, 303 Murfreesboro Rd. Woodbury, TN 37190, 615-563-5337

To send a flower arrangement or to plant trees in memory of Gerald "Joe Joe" Allen McCandless, please click here to visit our Sympathy Store.

To order memorial trees or send flowers to the family in memory of Gerald "Joe Joe" Allen McCandless, please visit our flower store.