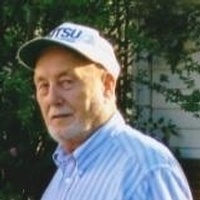 Mr. Hank Lloyd, 84, of Woodbury passed away on April 16, 2018. He was born in Toledo, Ohio on February 28, 1934. He was preceded in death by his parents, Rudolph Lloyd and Lillian Fulton Lloyd; wife, Gracie Alene Johnson Lloyd; son, Danny Lloyd; brother, Bobby Lloyd; and a grandson, Ricky Smith.
He is survived by sons, Mike (Laura) Lloyd of Florida, Jim (Leslie) Lloyd of Bradyville, Rick (Ann) Smith of Michigan, Tom (Tina) Smith of Michigan; daughter, Cindy (Terry) Staton of McMinnville; sister, May (Ray) Smith of Michigan; special grandchildren Brandi (Brad Johnson) Pelham and Chase (Hollie) Pelham; numerous grandchildren, and great grandchildren, also by a special friend Norma Bryson.
Mr. Hank lived a colorful and full life. He had a passion for driving and law enforcement. He worked as a truck driver for many years. As a hobby he drove stock cars on the ARCA circuit and owned a garage and gas station for many years. He was inducted into the ARCA hall of fame in 2009. Over the years he worked in several law enforcement departments. He started in the Sheriff’s Department of Lucas County Ohio, later Cannon County Sheriff’s Department, and Campus Police Department at MTSU. During his time at MTSU he met and got to know many different music artists. His love of law enforcement caused him to be an active member of the F.O.P. for many years.
He also worked as a guard on an armored car with Wells Fargo. His love of cars carried on to helping a local car dealer and friend, Randy Vance at Vance Motors. Hank enjoyed joking and sharing stories with family and friends. If he had a choice about something to eat it would be anything chocolate. His nature was to be honest and to the point, even if you didn’t like it. He was very strong in his beliefs. He was raised in the Church of Christ and was a member of the Smith Grove Church of Christ. Hank was involved in many different community projects through the years, he wanted to give back and help the community. He was a former board member for Center Hill Cemetery. He and fellow officer Bill Avera started the neighborhood watch in Cannon County. He was instrumental in providing Christmas baskets of food for needy families in the community. After he transitioned to living at the Woodbury Health and Rehab Center he kept his sense of humor. The staff and fellow patients got a kick out of how he would joke and say, “Hey Baby” to people he encountered.
Visitation will be held at Smith Funeral Home on Wednesday, April 18, 2018 from 2-8 pm and on Thursday, April 19th from 11-2 pm. Funeral services will follow visitation on Thursday at 2 pm in the Smith Funeral Home chapel. Herb Alsup will officiate. Interment will be in Center Hill Cemetery. Memorial donations may be given to either F.O.P., Smith Grove Church of Christ, or Alzheimer’s Association. Contact Smith Funeral Home for details. Share memories and condolences at www.smithfuneralhomewoodbury.net Smith Funeral Home, 303 Murfreesboro Rd. Woodbury, TN 615-563-5337

To send a flower arrangement or to plant trees in memory of Hank Lloyd, please click here to visit our Sympathy Store.

To order memorial trees or send flowers to the family in memory of Hank Lloyd, please visit our flower store.