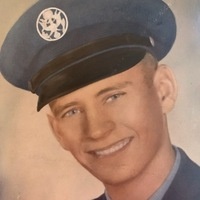 Mr. Davis grew up the oldest of a large poor family in Middle Tennessee.  They had a hard-working mother who raised the family well under the circumstances.  He joined the U. S. Air Force during the Korean War and served in Japan.  Up to that point he had rarely been out of Tennesee.  He was later stationed in Cheyenne, Wyoming where he met his wife Jane and a few years later had their son Jimmy.  Through the years they lived in Alaska, Florida, and traveled a lot including back to Wyoming very often.  He enjoyed camping, playing Rook, Scrabble, and especially poker while enjoying a chew of tobacco.

He was a lifelong electrician and worked many places including his brother’s company S&W Electric.  He loved his family deeply, especially his dog and close companion B.T.  He also enjoyed watching NASCAR and his UT Vols.  He was a true survivor who endured many physical and emotional challenges in life.

Visitation will be held at Smith Funeral Home on Saturday, September 19, 2020 from 11am-12pm.  A brief service will be held at 12 pm in the Smith Funeral Home chapel.  A celebration of his life and spirit will then continue at his son’s home thereafter.  In lieu of flowers memorial donations are requested to either Rutherford County P.A.W.S. or the National Wildlife Federation.  Share condolences and memories at www.smithfuneralhomewoodbury.net  Smith Funeral Home, 303 Murfreesboro Rd. Woodbury, TN 37190, 615-563-5337

To send a flower arrangement or to plant trees in memory of James "Jim" Devello Davis, Sr., please click here to visit our Sympathy Store.

To order memorial trees or send flowers to the family in memory of James "Jim" Devello Davis, Sr., please visit our flower store.