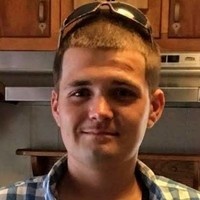 Mr. Joseph “Blake” Barrett, 24, of Woodbury passed away on October 15, 2019. He was born in Murfreesboro, TN on November 13, 1994. He was preceded in death by his grandparents, John P. and Patricia Barrett and Molly Sue Butcher.

He is survived by his mother, Tammy Hazel Barrett of Morrison; father, Joe Don Barrett of Woodbury; brother, Bronson Barrett of Woodbury; grandfather, Billy (Barbara) Hazel of Murfreesboro; step-grandfather, Rick Butcher of Readyville; several aunts, uncles, and numerous cousins and friends; and close friend Andrew Ellis of Gassaway.
He was known to family and friends as Blake. He was an easy-going country boy. He was a hard worker but had suffered with diabetes for a big part of his life. Working with his father logging, excavating, fixing equipment, and welding. The talent for being able to do many different kinds of work runs in his family. Growing up around all the men he developed a love for the outdoors. They had coon dogs and he also loved his mother’s Pitbull Lulu. He enjoyed going catfishing at Normandy Lake and Rock Island. He liked hunting for turkey and deer. Many of his friends and family knew him to be a good shot with a rifle or pistol. Some of them had him sight in scopes for their rifles. He and Bronson shared a very close bond as brothers.

To send a flower arrangement or to plant trees in memory of Joseph "Blake" Blake Barrett, please click here to visit our Sympathy Store.

To order memorial trees or send flowers to the family in memory of Joseph "Blake" Blake Barrett, please visit our flower store.