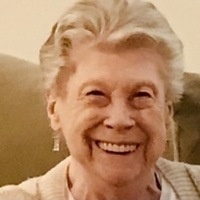 Ms. Juliana "Judy" Jeffries Estelle, 82, of Murfreesboro, TN passed away on November 13, 2021. She was born in Anderson, IN on April 6, 1939. Preceding her in death were her father, Charles Jeffries; mother, Mary Laura Gray (Clifford) Bodenhafer; sister, Janet Rothel; and granddaughter, Samantha Jane Hunt.

Ms. Judy had a free spirit and a caring heart. Because of that, her life revolved around adventure and family. Born and raised in Anderson, IN, she tethered her life to the town, but she wasn't afraid to see just how long her tether was. At the age of 17, she married a military man named Don Shirley and moved to London. They lived there for a few years before divorcing, and then, Judy decided to come back home.

Returning to Anderson, Judy began to be courted by Robert "Bob" Estelle. When they were married, they found an alignment in their desire for adventure and traveled, living in Alaska, British Columbia, and Washington state. In 1968, Judy and Bob mutually decided to separate and go their separate ways. Judy stayed in Washington, where she found a supportive community and Russell Rudolph Meyer. They were what one might call "original hippies," and though they did not attend Woodstock, they did attend the West Coast version.

Their life in Washington involved living out in the forest amongst the cedar trees, and in 1970, they were blessed with their daughter, Elisabetta. They lived in Beaver, WA for a while before moving to Forks, WA. Elisabetta remembers the house being the definition of "off the grid." There was a single road that went out into the forest to their house. It had no electricity and no running water, and they took their baths outside. Though this lifestyle fit Judy's spirit, she started to feel her tether being tugged.

In 1974, Judy moved back to Anderson, and Russell went to be with his family in California. Doing a near 180-degree turn, Judy began working in an office as an Administrative Assistant. Organized and detail-oriented, she excelled at her work, and Elisabetta remembers accompanying her mom to the office on several occasions. However, Judy wanted more for herself and especially for her daughter, so she decided to further her education.

Attending Ball State University in Muncy, IN, she graduated early and with honors, earning her Bachelors in Natural Resources with a Minor in Conservation. Judy held a deep passion for environmental conservation. She started trying to sell solar panels and advocated for environmentally friendly practices, but she was a woman before her time. Almost immediately after her efforts, Judy decided to again test her tether and moved to middle Tennessee.

For a short while, Judy sold Herbalife Nutrition products but found the business model didn't meet her expectations. A crafty individual, Judy began working at the Daily News Journal as a Layout Artist. Again, her keen eye for the details and aesthetics came into play and got her noticed, and she ended up moving to Nashville to work as the Layout Artist for the Tennessean.

When the design work was no longer what she wanted to do, Judy found a home working for her brother, Jim, helping to make and sell Zook quilting frames. The job fit her well because her family and friends remember her as a weaver of love and happiness her whole life. That characteristic aided her in being a successful saleswoman. She brought Elisabetta on her sales call to Hobby Lobby and earned a valuable client for the company. Later down the line, Judy received the call that her mother and step-father's health were waning. With Elisabetta recently married, she packed her bags to get back to Anderson.

Judy provided the care her parents needed until they passed away. Then in 1998, she found that her life had a new tether, and it linked her back to her sweet daughter, Elisabetta in Tennessee. She decided to not stray too far at first and moved in with Elisabetta and her husband. Designing and helping build her apartment, Judy put her engineering and architectural skills to the test. Her apartment contained 4 closets that she constructed herself. She intended on continuing to be extremely organized and knew exactly how and where she wanted everything to be.

It also didn't break her heart that she had her 2 precious granddaughters right next to her. She loved them more than anything else in the world and enjoyed every opportunity she had to babysit them. Before they got too grown, she decided to take Elisabetta and the girls to Disneyland, and they had a grand time making memories that will last all of their lives.

When the girls started getting older and spreading their own wings, Judy decided it was time to change scenery with her social life. She moved into an independent living facility, and little did she know it would be her last and best move yet. Sometimes the most beautiful relationships do not blossom until later in life, and that was the case for Judy. It was at the independent living facility that she met and fell madly in love with her neighbor, Kenneth Franklin Ross. She and Kenneth shared many laughs, memories, and precious years together.

Throughout her life, Judy was a woman of trust and faith. She lived her life like an open book, and even authored her own short story called "Parallel Me" in her 60s. Her story shared an alternate universe where she wrote about all of the potential she saw in her life and family's lives. Though Elisabetta wasn't an artist at the time, a mother knows her daughter, and Judy gave life to a path Elisabetta would choose several years later.

In terms of giving, Judy was prepared to give people what they needed in life, and on several occasions, she found that it was simply quality time. She maintained close relationships with her friends, and they liked to get together and play card games, like Rummy and Hand and Foot. She was also always close with her younger sister, Susie, and made sure her many nieces and nephews knew they were loved. Another recurring need Judy saw for people was prayer, and Judy remained fervent in her prayer life.

Her testament for Christ began when she stumbled across informational materials at the old Reading Room in Murfreesboro about the Christian Scientist community. She finally felt like she had found what she'd been searching for. It brought her back to the time she spent as a child singing in the choir and playing the piano for the church, and her light and spirituality only grew as she got older. Though her family aches with her parting from their presence, they know she's been reunited with the loved ones that went on before her.

Private memorial services will be held by the family at a later date. Share memories and condolences at www.gentrysmithfuneralhome.com Gentry-Smith Funeral Home, 303 Murfreesboro Rd. Woodbury, TN 37190, 615-563-5337 Because every life has a story

To send a flower arrangement or to plant trees in memory of Juliana Estelle, please click here to visit our Sympathy Store.

To order memorial trees or send flowers to the family in memory of Juliana Estelle, please visit our flower store.