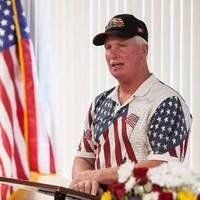 He is survived by his wife, Nancy Bucknell Studd and their two sons, Joshua and Nathanial Studd of Woodbury; sons, Sean (Sarah) Studd and their children,  Jade and Brandon of Woodbury and Daniel (Leah) Studd and their children, Caleb and Laney of Beechgrove; daughters, Shannon (Ryan) Bush and their children, Kylie and Emily of Readyville and Dawn (George) Hart of Poughkeepsie, NY; stepdaughter, Annie Snook of South Portland, ME; Lindsey's children, Drew, Jake, and Chase; brother, Ryan (Beverly) Studd of Bethpage; half-brother, Gordon Waid; stepbrothers, Paul Duwayne (Becky) Waid of Russell, PA and Bruce Waid of Kennedy, NY; sisters, Laura (Mike) Cox of Decherd, Heidi Causey of Gillette, WY, and Maralyn (Peter) Fryberger of Owen’s Crossroads, AL; stepsister, Rosemary Olive (Steve) Fannin of TX; and numerous nieces and nephews. He was also blessed with a multiplicity of friends.

When Sgt. Studd made the decision to return to civilian life, he utilized the skillset he gained in the U.S. Marine Corps. He drove for Cassens Transport Company and jokingly made his job title “Carhaulogist.” Though protecting and providing for his family were key areas of interest for Sgt. Studd, he also had the goal to instill in his children the value of God and Country as well as the community. His training kicked in, and he again stepped up to the plate to lead by action. Over the course of his life, Sgt. Studd was involved in countless civic groups, volunteer organizations, and other entities. To name a few, he was a founding member and former Assistant Chief of the West Side Volunteer Fire Department, served as Chairman of the Cannon County Election Commission, and was very active in the Hilton Stone American Legion Post 279 and Tactical Civics.

Outside of government and community, Sgt. Studd was an outgoing Christian and an avid hunter. An evangelist at heart, wherever he happened to be was seen as an opportunity to talk to someone about salvation. He recharged his spirit by attending services at World Outreach Church and through his personal Bible studies. When he needed time to himself, he enjoyed going hunting and being out in God’s creation. He made the most of his TWRA membership every chance he had, and his children were beneficiaries of that.

He raised a family of outdoor enthusiasts. Shannon, Sean, Daniel, Annie, Dawn, and Lindsey enjoyed several camping trips and outdoor adventures growing up. Going camping with a Marine kept things interesting, and the weather was only considered an inconvenience rather than a concern. Sgt. Studd had told stories of camping when the rain was pouring down so hard that the air mattresses were floating. All of those adventures will be memories cherished across lifetimes as the stories are relived and retold.

In 1999, Sgt. Studd decided to create an online dating profile. A woman named Nancy Bucknell reached out to him, and they immediately hit it off. After dating for 2 years, they were married on September 1, 2001 in the Woodbury Church of Christ. They built their lives together and created a blended family with their 2 sons, Joshua and Nathanial. Even though the boys were born in an age of technology, Sgt. Studd still made sure he got them outside.

Mud bogs, car shows, and air shows hold irreplaceable memories as well as all of the nerf and water gun fights. It was important to Sgt. Studd for his boys to understand the value of living in America. So, every year on April 19, Sgt. Studd would take Joshua and Nathanial out, let them pick a long rifle, and commemorate the day of “the shot heard round the world” in 1775. It was a small act that kept in the forefront of their minds the sacrifices made for the creation of America.

Sgt. Matthew Studd enlisted in the USMC in December 1975, pledging his Oath to defend the Constitution and Country against all enemies, foreign and domestic so help him God. He firmly maintained that his oath would never expire, and his patriot mentality was partially derived from his family's rich military heritage. His paternal grandfather, Lee Studd, served in the USMC during WWI. Lee fought in the Battle of Belleau Wood France, where the German command labeled the ferocious marines "Devil Dogs."

Following the Japanese raid on Pearl Harbor, his father, Loris Studd, and his uncles, Warren and Marshall Studd, dropped out of high school and enlisted in the military. Warren followed in his father's footsteps and served in the USMC, while Loris and Marshall elected to join the US Navy, both serving in the Pacific Theater. Loris served on the USS Cacapon (AO-52), which was a T3 Cimarron-class fleet oiler. Following their enlistments to serve during WWII, all three brothers were honorably discharged.

Deciding to join the military was not a decision made lightly by Sgt. Studd. He had big shoes to fill when he entered basic training at the Marine Corps Recruit Depot San Diego in Platoon 1137. However, he was prepared for the challenge and stepped up to the plate. During basic, Sgt. Studd was the Second Squad Leader and was second highest in the Expert Rifle Score. He earned a meritorious promotion to PFC E-2 upon his graduation.

After basic, Sgt. Studd was assigned to Basic Motor Transport Training at Camp Johnson. Graduating in the top 10 of the class, he was then given orders to complete the Advanced Motor Transport Training Program. Again, he graduated at the top, earning him the opportunity to choose his duty station. Receiving another early meritorious promotion to Lance Corporal E-3, Sgt. Studd was sent across the country to the Third Marine Air Wing, WERS-37 (Wing Equipment Repair Squadron 37) at the El-Toro Air Base in Southern California. He served on the 4th Echelon Component Rebuild Platoon and was nominated for Marine of the Month, which later lead to another early meritorious promotion to Corporal E-4.

The Component Rebuild Platoon was reorganized and restructured to become the 1st FSSG Det. B (Force Service Support Group and a Detachment) from Camp Pendleton, and Sgt. Studd became one of the platoon leaders. As a leader, he was directly responsible for reducing downtime and the number of motor transport vehicles parked on the Compound awaiting parts and repairs. With the teams under his command, Sgt. Studd was able to achieve zero trucks parked idle awaiting repairs on numerous occasions. It was the strong oversight and high standards of his leading officers that cultivated the esprit de corps within Sgt. Studd, which he shared liberally with those he was directly responsible.

Later on, Sgt. Studd received recognition through a Meritorious Mass put on by the commanding officer. After 18 months in service, another early meritorious promotion came Sgt. Studd's way, and he was promoted to Sergeant E-5 and to the Platoon Sergeant position. Prior to leaving the USMC, Sgt. Studd was presented the honorable Warrant Officer's opportunity, which would have turned the USMC into a career. However, with two children recently delivered at the Long Beach Naval Hospital, he decided to conclude his enlistment and pursue a life as a civilian father. What he termed his "4-year enlightenment" came to an end in November 1979, but the memories and lessons live on.

Sgt. Studd expressed his deep appreciation for the education and growth that the USMC afforded him early on in his life. The saying, "Once a Marine, always a Marine" remained true throughout his life. He believed and saw how freedom and liberty can be just one generation away from being lost if we allow it. Old Glory was more than just a symbol to him. He made an oath to devote his life to the protection of the values and freedom for which it stands. To have family and personal experience fighting for and sacrificing for something people take for granted daily gives you a different perspective on life, and his patriotism and sense of honor brought to life a time often forgotten.

A few months before he passed, Sgt. Studd shared a prayer with Hilton Stone American Legion Auxiliary Unit 279, and it is one that he would want to continue being prayed for our Country:

"May God Almighty bless and guide America and those who have and who continue to serve Her. May He change the hearts of those bent on Her destruction or change their power and positions as Enemies of our Constitutional Republic. May America once again become a blessing to God Almighty and to the World, His Creation, of which we are a vital part!"

Visitation will be held at Gentry-Smith Funeral Home on Thursday, October 21, 2021 from 3-7 pm. The Celebration of Life will be Friday, October 22, 2021 with visitation from 2-3 pm and the service directly following at 3 pm in the Hillside Fellowship chapel. Wendell Sealy, Mae Beavers, and Mark Pody will officiate. In lieu of flowers, memorial donations may be made to A Soldier’s Child, Samaritan’s Purse, Global Accord, and Doctors Without Borders. Share memories and condolences at www.gentrysmithfuneralhome.com Gentry-Smith Funeral Home, 303 Murfreesboro Rd. Woodbury, TN 37190, 615-563-5337 Because every life has a story

To send a flower arrangement or to plant trees in memory of Matthew Studd, please click here to visit our Sympathy Store.

To order memorial trees or send flowers to the family in memory of Matthew Studd, please visit our flower store.