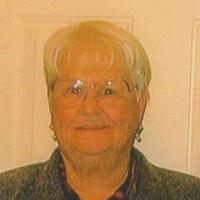 Mrs. Meda grew up in an enormous family even for that period. They were raising a big family in one of the hardest times in America’s history. Even so, they found a way to feed, clothe, and have a very close family bond. She learned early on from her mother how to be selfless for the sake of her family. When they were lucky enough to have chicken, she would take the back or a wing for herself so the others could have the better pieces. She was a graduate of Woodbury Central High School. She was also a member of the Baptist Church.

Mrs. Meda had a sweet personality and never wanted to put anyone out to do something for her. She was a devoted wife and mother. She wasn’t afraid of hard work. She and Mr. Nobel built their home together in 1963. They raised their daughters and lived a good but simple life. Their home was located right on the Cannon and Warren County lines. They would joke about sleeping in Cannon County and eating in Warren County. He passed away one-month shy of their 70th Anniversary. You would hardly see one without the other.

To send a flower arrangement or to plant trees in memory of Meda Blair Carr, please click here to visit our Sympathy Store.

To order memorial trees or send flowers to the family in memory of Meda Blair Carr, please visit our flower store.