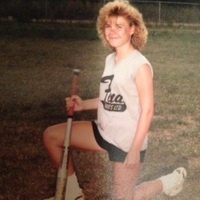 Mrs. Melissa Basham Wagner, 48, of Hendersonville, TN graduated to her eternal reward on March 1, 2022, at home with family by her side. She was born March 20, 1973, in Livonia, Michigan to her parents, the late Jerry Basham and the late Sharon Cadoret. In addition to her parents, she was preceded in death by her grandparents, Ray and Maudie Basham; uncles: Harold Basham, Ray Olton Basham; and mother-in-law, Judy Wagner, all of Woodbury.

Melissa moved from Wayne, MI around four years old and grew up in and around Woodbury and Auburntown. She was an avid athlete starting in grade school and continuing into high school. Her passion for competition of all kinds formed her early years, and the schedules for playing softball and basketball kept her moving, but Melissa always made time for what was most important in life: her family and faith.

On July 25, 1992, Melissa decided to start her own family, marrying the love of her life, Christopher Michael Wagner. They met through Melissa’s stepbrother, Steven Taylor.  Chris says the first time he ever saw her, he was smitten. It wasn't until her sophomore year of high school at CCHS that Melissa discovered he existed. She ran up to him as he was boarding a bus after school, gave him a note expressing her attraction to him without a word, and ran off. From there, the rest is history. They were engaged to be married after Melissa graduated with the Class of 1991, and at the ages of 20 and 21, they began their lives together as husband and wife.

Like most, early years were a struggle in so many ways, but their solid raising and mutual faith prevailed in time. Neither of them was afraid to roll up their sleeves. Melissa had been involved in several different occupations starting at a very early age. She grew up in an entrepreneurial family with her grandfather, uncles, and father all having various long-standing, local businesses in Cannon County. Developing a passion for sales and especially real estate, Melissa quickly became enthralled in helping families find their first home, next home, or dream home. She ended up assisting families with buying and selling their property all over middle Tennessee.

Her success in sales and the real estate industry was derived from her creativity, tenacity, and love for others. Melissa excelled at many things including arts and crafts in general. She enjoyed a myriad of mediums to unleash her inner artist and express her creativity. Some of those activities included painting, drawing, creative writing, cooking, sewing, interior design, and gardening.

In all of her endeavors, Melissa strived to be a virtuous woman, acting as the hands, feet, and heart of her Savior. Melissa served in several capacities over the years with various church congregations in and around the Nashville area. LifeChurch in Hendersonville, The Belonging Co in Nashville, and Global Vision Bible Church in Mt. Juliet are just a few that held a special place in her heart. Outside of organized ministry, Melissa's primary interest was demonstrating and extending sacrificial love to others. Her personal ministry revolved around her and Chris' work with at-risk teens and young adults.

Being foster parents, Melissa and Chris had countless children enter and leave their lives, loving each one unconditionally. Their time serving in this capacity greatly influenced Melissa's plans for the future. She was in the process of working toward a degree in Clinical Psychology with the goal of obtaining a Ph.D. specializing in Adolescent Behavioral Health before the onset of her illness. Just weeks ago, Melissa and Chris moved to her final earthly home with their spiritual daughter, Averie Manglos in Nashville. In the absence of her physical presence, her love remains and the family plans to continue sharing her love and light with the world for generations to come.

Visitation will be held at Gentry-Smith Funeral Home on Saturday, March 5, 2022, from 5-8 pm. Funeral services will be Sunday, March 6, 2022, at 2 pm in the Gentry-Smith Funeral Home chapel. Linus Vaughn will officiate. In lieu of flowers, the family wishes for memorial donations to be made to the Fight Like a Girl Foundation, which was an overwhelming blessing to Melissa all throughout her battle. The foundation can be accessed here: www.fightlikeagirlfoundation.org/how-to-help/donate or mail your gift to honor Melissa to: Fight Like A Girl Foundation, 28045 Ranney Pkwy, Suite O, Westlake, OH 44145

For individuals that are unable to attend the services in person, a live stream will be available for virtual attendance. You can find that live stream at this link: https://1752-Gentry-Smith-Funeral-Home.livecontrol.tv/53787d42

To order memorial trees or send flowers to the family in memory of Melissa Basham Wagner, please visit our flower store.