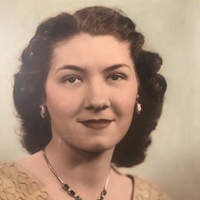 Mrs. Nadine was born the middle child on her family farm in the hollow at Sanders Fork. Growing up during the Great Depression, she knew the trials of this life early on in her childhood. She learned to be conservative and frugal and how to creatively save and reuse items. She attended Auburntown for grade school and quickly realized the most important things in life to be faith and family. Baptized into the Church of Christ, she was a shining light and loving heart to her family and friends.

Her family left their home at Sanders Fork and moved closer to town. She attended and played basketball at Woodbury Central High, where her bubbly personality earned her a spot in the “Big 11.” The Big 11 was a group of girls who became close-knit friends. They would often go horseback riding together and have continued to stay in touch after all these years. You could often find Mrs. Nadine giggling with her family and friends, but friends weren’t all she found during high school.

Once she met “Tip,” they quickly became sweethearts. He joined the military and left for Korea after high school but not before giving Mrs. Nadine a ring. While he was gone, she began working for Colonial Shirt Factory. She waited patiently and faithfully until he returned 2 years later, and they were married. Tip suffered a severe injury during the war, and she moved with him to Fort Gordon, GA for his rehabilitation. Though they considered starting their lives there together, they decided to come home to Woodbury.

Mrs. Nadine worked for Colonial Shirt Factory for nearly 25 years before making a change in career. She worked for the Bank of Commerce for 18 years as a teller and loved to see people at the drive-in. In everything she did, she kept that same loving heart. At the bank, she would often fulfill the role of a mother/grandmother for people she worked with, hearing their stories and giving them valuable advice. When the bank provided her with the opportunity to further her education, she started back to school, attending college in her 50s. Certain to not get a B, she worked hard and studied all the time to earn straight A’s in all of her classes.

Mrs. Nadine and Tip were simple people, they centered their lives around family.  Mrs. Nadine blessed the lives of those she considered her children. She was a loyal and devoted wife and mother, and Tip paid her back by being adamant about spoiling her at home. He often cooked her breakfast, did the housework, and took care of the vehicles. Mrs. Nadine didn’t learn to pump her own gas until Tip’s health began to falter.

She enjoyed going to Floating Mills at Center Hill Lake on the weekends with Tip and Roland to go boating and fishing. Once they decided to sell the boat, she easily filled her time taking Angie and Anthony to basketball, softball, baseball, and football games and practices. A talented seamstress, she made Roland’s and Angie’s clothes, even including a “Handcrafted by Nadine Milligan” tag in Angie’s clothes. She took the time to teach Angie how to sew, and they share many cherished memories of this time together.

To send a flower arrangement or to plant trees in memory of Nadine Milligan, please click here to visit our Sympathy Store.

To order memorial trees or send flowers to the family in memory of Nadine Milligan, please visit our flower store.