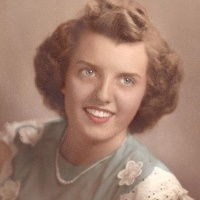 Mrs. King grew up in Woodbury. She was known to be a hard worker all her life. One of her first jobs was with Bratten & McCrary Drugs which later became Woodbury Drugs. She went on to work in the grocery business with Cooper & Martin-Malone & Hyde, Giant Foods of America. She worked her way up to be the store manager of the 100 Oaks location. During her time there she was tasked with helping close the last three of their stores in the Nashville area. She continued in the grocery business as produce manager with Bill Crook’s Grocery.

She and her husband made their home in Nashville for many years but she always had a love for her hometown of Woodbury. During earlier years she and her husband enjoyed planting a vegetable garden together. After she retired, she enjoyed having family over for a regular Tuesday night supper with fried chicken and Thursday lunch of BLT sandwiches. She loved her grandchildren and great grandchildren who lovingly called her “Mayme”.

Visitation will be held at Smith Funeral Home on Wednesday, July 17, 2019 from 11-2 pm. Funeral services will follow at 2 pm in the Smith Funeral Home chapel. Tim Gentry will officiate. Interment will be in Riverside Garden. In lieu of flowers the family requests donations to the Steve Bass Foundation providing scholarships for underprivileged children in law enforcement. Contact Smith Funeral Home for details. Share memories and condolences with the family at www.smithfuneralhomewoodbury.net Smith Funeral Home, 303 Murfreesboro Rd. Woodbury, TN 37190, 615-563-5337

To send a flower arrangement or to plant trees in memory of Peggy M King, please click here to visit our Sympathy Store.

To order memorial trees or send flowers to the family in memory of Peggy M King, please visit our flower store.