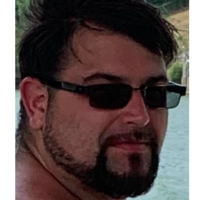 Mr. Alex fit into many categories during his short time on this earth. He was an outdoorsman, country boy, teddy bear, helping hand, and family man. Practically raised on the lake, he enjoyed spending time on the houseboat and going boating and water skiing. He had a love for the outdoors and found peace of mind being out in nature. Whether you found him mudding in his truck, splitting wood, or out camping, you were sure to see a smile on his face. He was fond of his time going camping and sitting around the fire with his family and friends. Though by no means was he a small man, he had a big heart. He would give his last dollar and the shirt off his back to help others. He was loyal to his family and friends. His father remembers him coming home with barely any pay after a work week at Sonic because he would let his friends charge their food to him. He had the rare gift of a giving heart, and his heart played a role in how he interacted with children. He was always a picture of love, patient and kind, and cherished spending time with his sons. You could tell what kind of person he was through the love he had for his family and the numerous friends that genuinely cared about him.

Visitation will be held at Smith Funeral Home on Sunday, March 14, 2021 from 3-7 pm.  Funeral services will be Monday, March 15, 2021 at 2 pm in the Smith Funeral Home chapel.  Tim Gentry will officiate.  Interment will be in Cherry Cemetery.  In lieu of flowers donations may be given to assist with expenses.  Share memories and condolences at www.smithfuneralhomewoodbury.net

To send a flower arrangement or to plant trees in memory of Raymond "Alex" Haines, please click here to visit our Sympathy Store.

To order memorial trees or send flowers to the family in memory of Raymond "Alex" Haines, please visit our flower store.