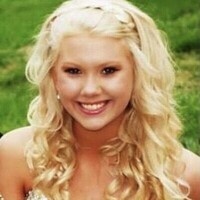 It seems fitting for Sammy’s birthday to have been in December as her presence shown like a bright star in the night. She strived to express the gifts of compassion, understanding, and forgiveness through her faith in an all-harmonious God and to demonstrate the saving grace of Christ Jesus. She maintained her faith and remarkable strength in the face of a hopeless diagnosis and prayed with a childlike trust that “all must be well” and that she eternally “lives and moves and has her being in God.” She grew up attending Sunday school at First Church of Christ, Scientist in Murfreesboro, TN, and continued to believe in her faith and the all-powerful, perfect love of God for herself and for all.

Sammy attended the McFadden School of Excellence from kindergarten through middle school and then Oakland High School before deciding at the age of 16 that she wanted to homeschool herself. However, she didn’t leave the public school system without leaving an impression. Her positive spirit and intellect worked together to make her both a gifted student in the classroom and a stellar member of her cheerleading squad, celebrating her own athleticism as well as encouraging her fellow students and teams towards excellence.

She was proud of being awarded “Best Smile” as her teacher explained that it was because no matter how bad things were going on any day, all she had to do was look over at Sammy. Without fail, she received a joyful smile that entirely brightened the room and the day.

Throughout her life, Sammy demonstrated just how much of a shining star she was. She was a gifted equestrian and enjoyed “pushing horses around” from a young age. In addition to having the beauty and the brawn, she was sensitive and perceptive which often allowed her to recognize and “get straight to the point” uncommonly quick. She was also quite funny with a unique sense of humor.

Her sensitivity not only helped her perception but was beneficial to others as she was someone who would invariably stick up for the underdog. Her strength and resilience were unmatched, and she was prepared to share them through heartfelt encouragement of others, especially children.

Sammy loved children and wanted to have a family of her own someday. If it weren’t for her condition at the time, she would have been the epitome of the “fun aunt.” She loved her niece and nephew unconditionally and regarded them as angels. She also had a close relationship with her Aunt Cyndy and her sister, Mary.

If you wanted to know Sammy though, all you needed was one word, bright. She was beautiful, resilient, intelligent, graceful, hospitable, and tenderhearted. They say that elegance is when the beauty on the outside matches what’s on the inside, and Sammy was a prime example.

Even though she endured an extended battle with illness, Sammy held firm. She remained a spiritual person. Her shoulders were broad enough and her heart was big enough to forgive others and herself. Though far too young to leave this earth, she was given the time and the grace to feel at peace with her situation. Losing such a precious light from this world has left her family’s hearts broken. When she was a little child, she used to tell her mother, and everyone else, “Watch me, watch me.” She had an innate way of commanding an audience her whole life. As an adult, she repeatedly requested for her mother to “Tell them about me,” so her family has continued to let their affection and precious memories shine in honor of their bright, shiny girl.

Memorial services will be Sunday, October 3, 2021 at 3 pm at Miller Cemetery in Christiana, TN. Her mother, Elisabetta Hunt, will begin the services, and family and friends are invited to speak as well. Share memories and condolences at www.gentrysmithfuneralhome.com Gentry-Smith Funeral Home, 303 Murfreesboro Rd. Woodbury, TN 37190, 615-563-5337

To send a flower arrangement or to plant trees in memory of Samantha Jane Hunt, please click here to visit our Sympathy Store.

To order memorial trees or send flowers to the family in memory of Samantha Jane Hunt, please visit our flower store.