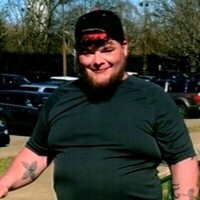 TJ was a kid at heart. He loved being with his friends and was close to his family, especially his cousin, BJ, and BJ’s daughter, Stella. During his childhood, many people knew he played football and did ROTC, but he also was talented at drawing. He had a big heart and an infectious smile that made forgiving him for pushing your buttons the easiest task. He was someone that could make even the shiest child crack a smile and come give a hug.

A big outdoorsman, fishing, hunting, 4-wheeling, and mudding were his hobbies of choice, but he also took pride in his work. His love for the outdoors and family came together during the years he worked with his Uncle Terry doing construction. When he wasn’t working with Uncle Terry, several people knew him from the Lions Den, where he helped his Aunt Jeannie. She fondly remembers him thinking he was a chef and saying “ain’t bragging, but I can cook some chicken.” He was a man of many talents, but there is one thing you knew for sure about him. Whether you saw TJ with his friends or family, outdoors or inside, working or playing, you weren’t going to miss the bright red in his outfit from his Chicago Bulls hat. He always wore it, and it became part of his signature look.

Visitation will be held at Smith Funeral Home on Sunday, May 2, 2021 from 1-4 pm. Memorial services will follow in the Smith Funeral Home chapel at 4 pm. Tim Higgins will officiate. In lieu of flowers, memorial donations may be made to assist with funeral expenses by contacting Smith Funeral Home. Share thoughts, memories, and condolences at www.smithfuneralhomewoodbury.net Smith Funeral Home, 303 Murfreesboro Rd. Woodbury, TN 37190, 615-563-5337

To send a flower arrangement or to plant trees in memory of Terry Joseph "T.J." Rettmann Durham, please click here to visit our Sympathy Store.

To order memorial trees or send flowers to the family in memory of Terry Joseph "T.J." Rettmann Durham, please visit our flower store.